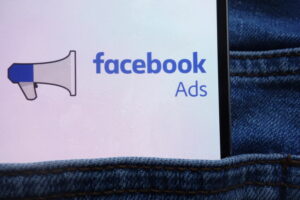 Facebook is a platform on which users can distribute content, play games and organize information, publishers can broadcast content, and advertisers deliver targeted advertisements. To understand Facebook’s business model, we must understand Facebook’s ecosystem. In this blog, I present an overview of its ecosystem, present a few of  the interactions by which it acquires user data and earns money, and discuss the core dilemma that it faces today in the continuation of its business model.

This blog ignores Facebook Messenger, Instagram and WhatsApp. It is restricted to the Facebook social network only. A complete analysis of Facebook’s social network business model is provided in an accompanying White Paper that is freely downloadable. Our analysis has been pieced together from public information found on the web. The White Paper contains all links to the sources used. If you think we have misinterpreted the information that we found, or that we missed relevant information, please contact us at info@thevalueengineers.nl.

An ecosystem consists of legal or natural persons who depend on each other for their survival and well-being. We can structure any ecosystem into layers, where lower layers provide services to higher layers. In addition, all ecosystems have a governance structure at all these layers. Take a look at the following diagram. 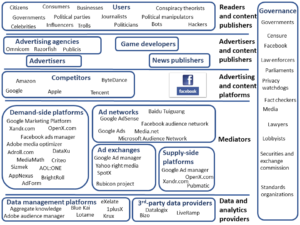 Anyone and anything with an email address or telephone number can become a Facebook user and then publish content and read content. Consequently, the size of its user base is huge: 2.6 billion people, not counting users of WhatsApp and Instagram. To put this into perspective: The population of China is 1.5 billion, that of the European Union is 445 million.

Users are being served by advertisers, and by more content publishers such as game developers and news publishers. All of them use Facebook’s services.

Facebook in turn uses the services of ad networks, who bundle access of advertisers to content publishers. Facebook itself operates one of these ad networks, called Facebook Audience Network. In addition, Facebook and its competitors use ad exchanges, where ad space is auctioned. Advertisers and content publishers use demand-side and supply-side platforms to bid on these auctions, manage campaigns, and sell ad space. All these companies use the services of 3rd-party data providers and data management platforms, who collect and analyze consumer data.

Governance of an ecosystem consists of the set of decisions about the survival and well-being of the ecosystem as a whole. This includes decisions about applicable law, moderation, standards, finance, etc. Governance is distributed over many actors. 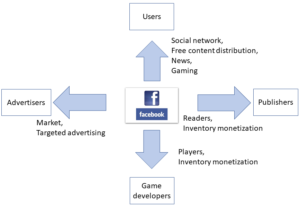 Facebook offers the following platform services. Each service involves an interaction between two or more of its customer segments:

In addition to being a platform where its customer segments can interact, Facebook also offers what I have elsewhere called a layer platform, on top of which users can perform activities:

In the rest of this blog, I show two of the value networks involved in some of these Facebook services: showing matching content to users and placing a targeted ad. All other value networks are given in our companion White Paper.

The next diagram shows that users can play the role of writer and readers of content. These two market segments contain the same people but they play different roles in the interaction among users. Writers have a need to broadcast a message and readers want to view posts written by others. 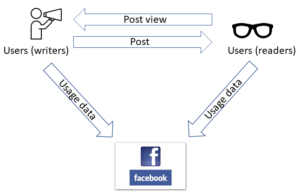 The arrows in the diagram represent legal agreement among actors and market segments. The agreements represented here is that Facebook matches a post to a post view and in return for that receives usage data from the writer and readers. This is a three-way commercial transaction among writers, readers and Facebook.

The technical infrastructure by which Facebook enables this interaction is not represented in this diagram. Posts are exchanged and usage data collected by the software infrastructure of Facebook. What the diagram above represents is what things of value -value objects- pas among actors thanks to this software infrastructure.  More information about this approach to modeling can be found in our resource page on https://www.thevalueengineers.nl. The executable e3value model for the above set of exchanges is given in the white paper.

The service that Faecook delivers here is targeted content matching. It brings together users that have matching needs. Writers want to broadcast messages, readers want to see matching posts (posts that interest them). These needs are fulfilled in one commercial transaction, in which Facebook enables this transaction and collects data about the writer and reader. It may register how often a writer’s posts are read, and by whom, and what posts a reader reads, and how often.

Targeted advertising is a four-way commercial transaction in which an advertiser pays Facebook to place an ad next to content produced by a publisher when it is read by a user with a matching profile. The following diagram clarifies the transaction. 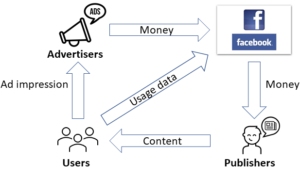 Publishers could be members of Facebook’s audience network, or game developers, or news publishers, influencers with a large following, etc.

There is a lot more in the value network of Facebook, but enough has been said to understand the gist of its business model. An overview of the business model is given in the White Paper.

The core business of Facebook is targeted matching. Matching of user content is done in return for data, matching ads to user profiles is done against commercial tariffs. More than 98% of Facebook’s income is generated by advertising. The core resource that Facebook maintains to generate this income is user profiles.

Governance of an ecosystem is the set of decisions about the survival and well-being of the ecosystem. One decision that Facebook has made is to extend its user base with the population of Africa. It has invested in a consortium that will encircle the African continent with a subsea cable to serve both Africa and the Middle East. This will expand its access to markets of 1.3 billion (Africa) and 400 million (Middle East) people.

The growth and well-being of Facebook depends crucially on the ease with which anyone or anything with an email address or telephone number can become a member of its social network and start broadcasting posts. However, this has had mixed impact on the survival and well-being of the ecosystem. Facebook posts with fake news have incited violence in India and Nigeria and have been linked to violence against Rohingya in Myanmar. It has been an instrument of political manipulation, fake news, and hate speech.

Facebook’s moderation of posts has not solved this problem and now it wants regulators to solve the problem for them. Other possible solutions change the business model: gatekeeping new registrations, signing each post by the sender, permitting only broadcasts to a defined set of friends, preventing public discoverability of all posts, switching to a subscription model, or charging the sender a price for broadcasting, similar to the price for sending a paper mail to the same audience. All these proposals would destroy the very lucrative business model that Facebook enjoys now.