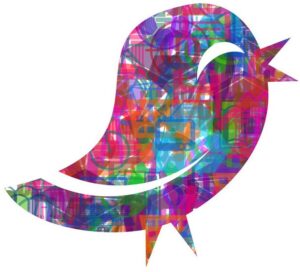 Twitter is one of the smallest social networks in terms of daily active users (152 M) and revenue (US$ 3.5B in 2019). Compare this with Facebook’s 1.8B daily active users (US$ 71B revenue in 2019) or even with TikTok’s 800M daily active users. Yet, Twitter has a disproportional impact on society. It has opened the sluice gates for fake news, misinformation, political manipulation, hate speech, conspiracy theories and unfounded opinions. It seems to occupy a significant portion of the attention of politicians, journalists and advocacy groups. Twitter has enlisted the support of researchers to improve what it calls the health of the network, and at the same time it is trying to move to a network on which people communicate about sports, entertainment, and events rather than about politics.

In this blog I summarize the mission, value proposition, ecosystem and value network of Twitter. This gives us a sound grasp of the strategic position of Twitter. I conclude with a brief discussion of the strategic options open for Twitter. A full report is given in the accompanying White Paper.

to give everyone the power to create and share ideas and information instantly without barriers.

The creation part is remarkable, for Twitter does not provide any tools for idea generation. However, it does provide a tool for anyone to immediately speak his or her mind and broadcast it without barriers for all internet users to see.

Our business and revenue will always follow that mission in ways that improve – and do not detract from – a free and global conversation.

This leaves open what “improve” means. To have a free conversation is to have no barriers to expression, and to have a global conversation is, in Twitter context, a conversation that can be followed by any internet user. This is already the case. What could be improved further?

Jack Dorsey clarified this in 2018:

“We have witnessed abuse, harassment, troll armies, manipulation through bots and human-coordination, misinformation campaigns, and increasingly divisive echo chambers. We aren’t proud of how people have taken advantage of our service, or our inability to address it fast enough.”

The free and global conversation must be “healthy” but Twitter is still working out what this means and how to enforce it without violating their mission to allow anyone to broadcast their mind instantly, globally and without inhibition.

Like any business ecosystem, the Twitter ecosystem is layered, with lower-level actors providing services to higher-level actors. In addition, there are governing actors whose authority and impact maybe restricted to one level or may span all levels. The following diagram clarifies this. 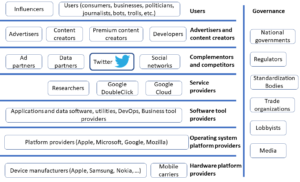 Twitter users play two roles: readers and writers. Twitter broadcasts tweets produced by writers, and it shows readers tweets that match their interests and profile. In other words, from an economic point of view, Twitter performs two valuable functions:

Users pay for this with their usage data.

The collection of usage data from writers and readers is what we call true data mining: Twitter extracts data from user behavior, just as oil companies extract oil from petroleum reservoirs. User behavior is the resource from which Twitter extracts data. Processing this data, which is customarily called data mining too, is similar to refining oil.

There are several other networks with which Twitter creates value. Here is the value network of premium content providers. 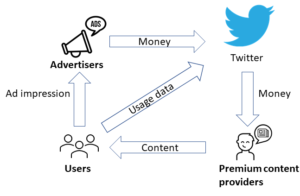 Twitter’s advertising model is no different from that of Facebook. Its data access program is similar to that of LinkedIn.

Twitter is currently acting against spam and fake accounts and this is not appreciated by a number of influential users, such as the current president of the Unites States. However, just like Facebook, Twitter exploits data that it gathers by offering unfiltered global instant communication to anyone with a telephone number and internet access. There is no way this offering can be sustained without also facilitating fake news, fake accounts, hate speech and political manipulation. Something has to give: Restrict access, add filtering or restrict the audience.  Possible changes in the business model are removing the anonymity of the sender, moving to a subscription model, or charging a price for a tweet proportional to the size of the audience.

Twitter has added functions to act as a second screen for events, sports and entertainment, such as Twitter Amplify. Twitter may have found an economically sustainable business model in this. Time will tell. It remains to be seen if it will be able to avoid the problem of platform manipulation.