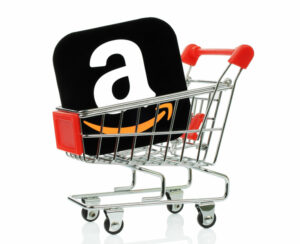 Amazon has grown from the humble bookshop with which it began into a not-so-humble empire of ecosystems that offers just about everything that can be delivered physically or digitally to the consumer’s home. I sketched the map of this empire in my previous blog. Here, we will review the business models that Amazon uses to generate revenue from its empire.

A business model is a conceptual model of how a business creates, delivers and captures value. TVE have defined an outward-looking business model template that consists of

All of these components look outside Amazon, at its ecosystem. The core part of the model is the value network.

Let’s start with the simplest one: Retail.

The retail business model is that vendors sell stuff to Amazon, who sells them online to consumers and delivers them to their doorstep. Delivery is by truck, robot, drone or online for digital content.

Vendors in this model are independent brands but also private labels of Amazon itself and subsidiaries who sell connected home products like the Kindle and Fire TV.

Revenue is generated in the traditional way, by the price difference between what it pays vendors and asks consumers. In addition, each transaction generates data that is used by Amazon to generate revenue in other ways, for example by advertising.

Amazon’s USP here is that it offers free delivery within two days, or one day for Prime customers.  Its large product range and low prices are USPs it can offer only on its marketplace, treated below.

In the following diagram, the arrows represent commercial transactions. The bullet in consumer says that consumers have a need satisfied by the transaction connected to it. The cross in the vendor says that the way vendors acquire or manufacture products sold to Amazon is not part of this business model. The web shop performs one value-adding activity, Retail. How this is implemented using operational activities like warehousing, payment and logistics, is not part of this business model. They are cost centers, that must be financed by the revenue generated by the retail value-adding activity. 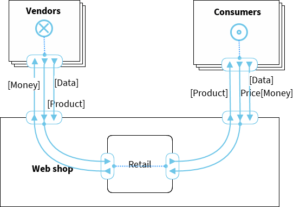 In the retail model, Amazon has inventory costs. These disappear in the marketplace model.

In the marketplace model, Amazon matches buyers and sellers, collecting data along the way. Sellers sell stuff to consumers, and pay transaction fees and other costs to Amazon. Products are delivered to the consumer’s home by the seller itself or by Amazon, if the seller pays for that. 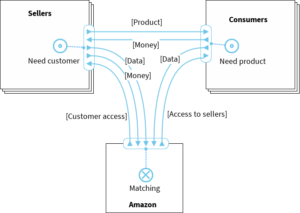 Amazon has no inventory costs here, and revenue for Amazon is generated by the fees sellers pay to Amazon.

Amazon’s matching function is implemented by a search algorithm by which consumers can search for products. If a product is offered cheaper elsewhere, then this product will not appear on the first pages of a search result on Amazon. Its USP for consumers is therefore not only the large range of products now offered on Amazon (web shop plus marketplace) but also its low prices. Its USP for sellers is the large number of consumers visit Amazon: 200M unique visitors per month in 2019.

Some of Amazon’s content delivery services are offered via a subscription model, shown next. 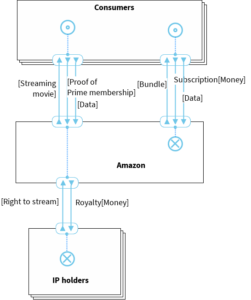 In this model, consumers must take out a Prime subscription and use that subscription to access the streaming movie service of Amazon Prime. This revenue is used to pay royalties to Intellectual Property owners.

Similar models are also used for games, music and e-books. In addition, this content can also be bought separately as any other digital product.

Delivery of content is by Amazon’s own devices, such as the Kindle, Echo or Fire Tablet, which locks in the consumer in Amazon’s ecosystem. Video, music and games can also be delivered by other online devices.

The true revenue generator here is not the subscription fee but the Prime bundle, explained next.

The Amazon Prime subscription offers free 1-day delivery, free video streaming and other perks to members for $119 per year. The subscription fee here is not the revenue generator. Prime members keep returning to Amazon and buy about twice as much from Amazon as non-members. Prime video does not have the goal of showing consumers video, as Netflix does. Its goal is to double income from the Amazon web site.

Amazon also generates revenue from in-app purchases, such as the sale of weapons or avatars in games. IP holders get a royalty for these sales. 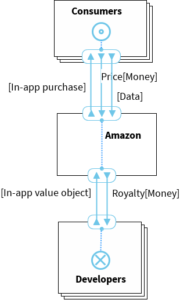 Royalties are collected here not via a subscription fee but by individual purchases.

Amazon’s advertising business is growing fast. It uses a by now traditional model for online advertising. In this model, content publishers, for example app developers, publish content that consumers are interested in. The content contains space (“inventory”) sold by Amazon to advertisers. When consumers see an ad, this is called an impression. Amazon thus sells impressions to advertisers and pays content publishers a royalty fee per impression. 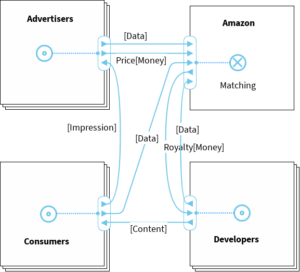 Amazon uses a second model, in which associates and influencers refer to items sold on Amazon and get paid for clicks that lead users to the Amazon site.

A store card is a credit card that can be used in one store only. It has the same business model as any credit card. The card offers consumers delayed payment in return for interest, and it offers a merchant access to consumers with a card. Credit card companies collect a processing fee for network access and brand usage (NABU). The merchants bank, called the acquiring bank, collects processing fees, and the cardholder’s bank, called the issuing bank, collects interest. In Amazon’s case, the issuing bank and credit card association is Synchrony. 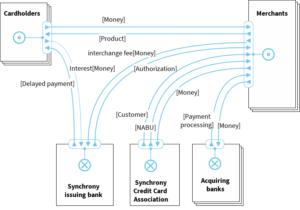 Amazon offers other financial services but enough has been shown here to get an impression of the wide variety of business models used by Amazon.

If we knew exact sales number and the size of market segments, we could use these models to compute cash flows. These numbers are not public. But to get an impression, we use some insights from Kamil Franek’s analysis of Amazon’s 2019 financial report.

Nearly all cash flow is invested in warehouses, logistics and server capacity (AWS). Together with a high cost of revenue this leads to a low net income of $12B. Dues to its high expenses in Europe it hardly paid any tax there.

Amazon does not have a single source of revenue, such as advertising (Facebook) or subscriptions (Netflix). It generates revenue as a retailer and a marketplace, from subscriptions (Prime), from in-app purchases (games), from renting out its infrastructure (AWS) and its expertise in logistics and retail, from selling advertising and from its payment technology and financial services.

The analysis by Kamil Franek shows that selling stuff online with low prices and free delivery is probably not profitable. Offering a marketplace for other people’s stuff is more profitable and offering your infrastructure to others is hugely profitable.

Finally, Amazon needs a costly physical infrastructure do business. Not only must it invest in AWS, it also builds and maintains warehouses and buys or leases trucks and planes to deliver the goods. Since all cash flow is reinvested in extending this physical infrastructure, Amazon has a low profit and can avoid paying profit tax.

In the next blog, we analyze the strategy that got Amazon to where it is now.