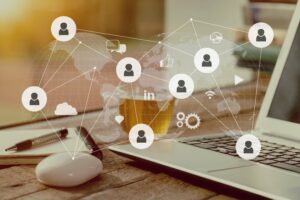 To cut a long story short, universal social media service would still allow social media to generate revenue, but increased competition and public service regulation would force them to improve their services and be accountable to the public. Let’s see how this would work.

Let’s look closer at the business model of telcos and other communication service providers.

All these services are platforms on top of which two or more customer segments can connect to each other. They are all communication providers funded by charging for access and/or usage fees from subscribers or advertisers

What distinguishes social media providers from the others is that social provide a dynamic matching function that matches producers and consumers of content based on their behavior and their social network. To see what makes this special, consider a shopping mall, which is a platform connecting buyers and shops. Access to the mall is free for buyers. To enter a shop, a buyer enters the shopping mall and passes other shops where they may see desirable things to buy.

If a shopping mall would behave as a social media provider, it would arrange the shops that you pass according to your past shopping behavior and your social network. You would see a different arrangement of shops than other buyers. And every time you enter the mall, you would see different shops. This dynamic matching is absent from shopping malls, and from the other communication platforms listed above.

This requires a universal identification system, just like email addresses and telephone numbers. And it requires standards for searching and exchanging content consisting of text, images, videos, and sound. This is technically possible. The matching function of a social media would be like an autonomous search function that presents you with content published on any social network. What would be the unique selling points of different social media providers?

The ability to create groups and broadcast to the group would not distinguish social media either. You could join any social network to do that.

This does not violate free speech: if some network does not want to distribute your rant, then find another network who does.

And if users join a network due to the advertised qualities of the algorithm, then the network must offer what they advertised. There is no way a universal social media provider could advertise the best cat videos and in reality distribute Nazi propaganda.

A universal social media mandate would force social media providers to move from service models to outcome models. Outcome-oriented revenue models promise a performance. They are implemented by a network of sensors that measures performance and charge the customer accordingly. For example, Rolls Royce does not sell jet engines, but thrust. Engine performance is measured by sensors, and customers pay for delivered performance.

Or social media could use an advertising model, in which usage is free but they attract paying advertisers with features of their distribution policy and characteristics of their user base.

Or they could combine these revenue models, as newspapers do.

There is no magic. But with an attractive matching proposition, social media should be able to generate positive net revenue.

What about conspiracy groups, misinformation and hate speech?

Would this supercharge conspiracy groups? Would it amplify hate speech even more than it does now?

But it does change matching services radically. Whatever the revenue model, matching services must advertise their distribution policy. This will have a sanitizing effect on what matching algorithms do.  “Want to hear the latest conspiracy around Covid-19? Join us!” “Want to keep up to date about flat earth theories? Join us!” With these matching policies, try to attract advertisers or paying customers.

What about sponsored networks?

Social media like Telegram and Signal are funded by rich sponsors or crowdsourcing and are free for users. There are no advertisements. If universal social media service would be mandated, then everyone would move to these groups. I doubt whether usage could still be free with 3 billion or more users.

Sponsored networks could move to a freemium model with free base services and paid premium services. Or they could limit the number of users. I do not see a reason why this would make universal social media service a bad proposition.

Public services must be accountable to the public.[iii] Universal social media should be transparent about at least the data they collect about their users and about the content that they distribute. They should publish this information in the native language of their users, and the truthfulness of these descriptions should be checked by auditors. This will not only improve public accountability, it will also improve their service to the public. I provide more information about transparency requirements in an earlier blog.

But even restricted to the USA, universal service would be a huge improvement. They would likely reduce profits of social media providers to the levels of normal businesses, so we can expect powerful lobbying against it. But universal service would introduce competition and motivate regulation, both of which would improve service and accountability of social media. This is a public interest for which government should take responsibility.

As a bonus, it would also open space for competitors from Europe, who would have a fair chance of developing matching services on a competitive marketplace without setting the impossible and irresponsible goal of becoming the next world-wide unmanageable monopolist.