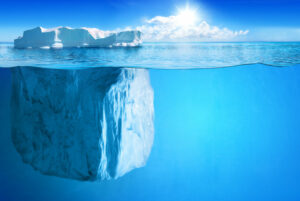 Spotify was founded in Sweden in 2006 by Daniel Ek and Martin Lorentzon. Its mission is “to unlock the potential of human creativity by giving a million creative artists the opportunity to live off their art and billions of fans the opportunity to enjoy and be inspired by these creators.”

Not really. Since its founding, Spotify has never made a profit. Its net loss in 2020 was € 581M, up from €186 in 2019. Artists receive $0.0084 or less per stream and are bitterly complaining that they cannot live off royalties from music streamed by Spotify.

What’s the problem? What are the prospects of turning this around? In this blog we deconstruct Spotify’s business model and review the possible ways out of this predicament.

Spotify streams audio, mostly music but increasingly also podcasts. It is financed by subscriptions and by ads, for those who don’t mind hearing ads while they are listening to music. This creates a number selling points for different stakeholders.

This is not unique to Spotify. Other streaming providers such as Apple Music and Amazon Prime Music also offer these advantages. Unique for Spotify is this:

As we will see, this is both a strength and a vulnerability of Spotify.

Spotify is able to offer its services thanks to a large value network of partners and suppliers. The following diagram shows part of this value network and shows what services Spotify is offering to various stakeholders. The real value network is much larger, because there are more partners, more competitors, more record companies, and more infrastructure providers, and the box labeled Artists is really a large ecosystem of freelancers, businesses, bands and others that produce creative works. 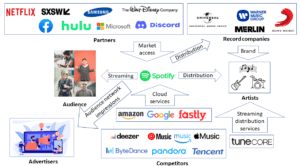 91% of Spotify’s revenue comes from subscriptions. After taking out a subscription, a user can listen to any track and Spotify pays royalties to the owners of the intellectual property (IP) of each streamed track.

In the advertising model, users listen to tracks in return for data, which Spotify uses to target advertisements to users and sell impressions, clicks or conversions to advertisers, who pay Spotify for this. Spotify pays royalties to IP owners for each streamed track.

In both revenue models, the core functions of Spotify are distribution and royalty payment. Each month, each artist is responsible for a fraction of streamed tracks. Spotify takes that fraction of the month’s revenue and pays 70% of this to the IP holder. If the IP holder is a record company, they pay a fraction of that out to the artist, depending on the contract they have with that artist.

Artists complain about the low rates they are paid. Estimates of how much artists receive vary from US$0.00029 per stream to 0.0084 per stream. According to one source, streaming songs one million times on Spotify generates as much income for an artist as selling 100 self-pressed CD’s. Some artists have assembled in an anti-Spotify club. 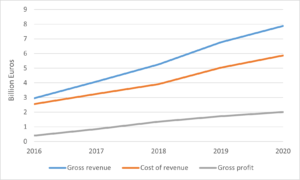 On top of that, there are operational costs that must be paid from gross profit. In 2020, Spotify spent €1B on marketing & sales, €800M on research & development and €400M on general & administrative tasks. Deducting these operational expenses from gross profit gives an operating loss of €293M. After deducting taxes and finance expenses from the operating loss, Spotify’s net loss in 2020 was €581M.

And this problem is structural: Spotify’s customer acquisition cost is high, and it must spend a considerable amount on R&D to remain attractive compared to its competitors. These operating costs are likely to exceed gross profit in the foreseeable future.

The big record labels have a power position with respect to Spotify because they own the IP of a huge library of music produced in the past decades that users want to hear. Users are attracted by this. Without it, users would leave Spotify.

Spotify may view itself as a platform that matches the interests of artists and listeners, but for the record labels it is a piracy-free distribution and royalty collection channel. Spotify acknowledge this as a risk of their current revenue model. “If we cannot successfully earn revenue at a rate that exceeds the operational costs, including royalty expenses, associated with our Service, we will not be able to achieve or sustain profitability or generate positive cash flow on a sustained basis.” (SEC 2020 page 11).

There are five ways out of this predicament, not all of them equally promising.

Spotify believes that raising prices may push users back into online piracy. This may very well be true. So we can expect Spotify to be hesitant about raising subscription fees further.

Asking a fee per stream

The subscription-based revenue model gives the user unlimited access to content without paying for individual usage. It would be more logical if user would pay a base fee for access and a usage fee for the number of streams, similar to telco subscriptions.

Worse, competitors would probably continue their flat-fee access-based revenue model, ignoring usage. Apple does not need to make a profit with Apple Music, because Apple Music’s primary function is to motivate people to buy Apple hardware, which is where Apple makes money. Amazon Prime Music does not need to make money either, as Prime is a mechanism to attract people to Amazon Marketplace. Prime members buy twice as much as other customers on Amazon Marketplace.

Spotify as an ad matching platform

In the ad-based revenue model, Spotify matches advertisers and listeners.  The number of ads shown or played to users is roughly proportional to the number of streams about which Spotify must pay royalties. This is more sustainable than the subscription model, where users play a flat fee for an unlimited number of streams.

But on the same page, Spotify says that their ad-supported service is a funnel that leads users to the premium service for subscribers, where users are free from ads. It is currently a small part of the business (9% of revenue), with a “significant” conversion to subscriptions (page 37). So we should not expect too much of a growth of this part of revenue.

Contracting independent artists would turn it into a record label, which is probably forbidden in the contracts Spotify has with the big record labels. Spotify has chosen a licensing model where they do not own the IP in a track, so that artists keep the IP in their work and Spotify does not become a label. The 70% payout to IP owners then goes directly to artists.

Taking a 30% cut of a transaction every time it takes place is usual in online matching platforms. Amazon marketplace takes the same cut from sales on its platform.  But it may not be enough to let artists live off their art. For comparison, 87% of the sellers on Amazon sell less than $100 000 per year on Amazon. Their profits will be a lot less. For most of them, selling on Amazon is probably a side hustle or a modest sales channel. This suggests that streaming independent artists will help artists to be heard but may not be enough for them to make a living off Spotify streams.

A second way to circumvent the royalty burden of the record labels is to expand outside music in spoken word, such as podcasts, negotiating royalty agreements with podcasters directly. Spotify is expanding rapidly in this field (SEC 2020 page 40).

This is similar to licensing independent music, except that unlike music, podcasts age. There will be no adults listening to the podcasts of their youth. Spotify amortizes each period of a podcast over the useful economic life or over its license period, whichever is shorter, starting at the release date of the period (SEC 2020 page 49). Unlike the back catalog of music that the record labels sit on, the library of podcasts needs to be refreshed continuously. Here too, Spotify must acquire podcasts that anticipate tends.