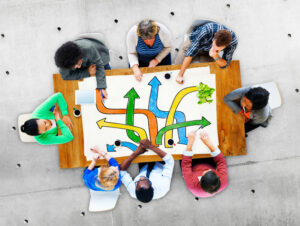 In my previous two blogs, I showed that machine-supported decisions are necessarily biased and that this biased can be reduced if the decision maker asks nine questions about a decision.

The sources of bias in this process and the questions to be asked by the decision maker are summarized in the next diagram.

But not everyone has the time and capability to answer the nine questions. A judge who takes 30 seconds for a decision about detainment has too little time; a driver using a semi-autonomous driving system has no time. To even be able to answer these questions, we must redesign the decision-making ecosystem and allocate the task of answering these questions to different actors. And this changes the allocation of responsibility for a decision.

Decision machines are part of ecosystems

Even systems considered to be autonomous such as deep-sea exploration robots and drones are embedded in ecosystems containing designers, manufacturers, quality control, pilots, sensor operators, maintenance personnel and regulators. Decision-making is distributed among all these actors. They cooperate to make the autonomous system fly, drive or navigate.[i] Prediction machines are no different.

Here is a diagram of some of the stakeholders involved in using a prediction machine to make a decision. 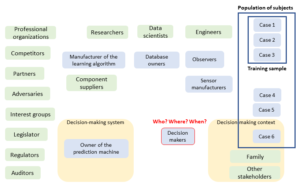 The blue stakeholders correspond to components of the decision-making diagram shown at the start of this blog. The others are present in most decisions. Each kind of application of a prediction machine requires its own ecosystem diagram.

Our goal is to make people and prediction machines cooperate to improve decision-making. All stakeholders in the above diagram contribute to the decisions that are made. Who of them is to be treated as the decision maker? Let’s first ask who needs to answer the decision-making questions listed above.

Who answers the nine questions?

The two stakeholders most involved in answering the questions are the data scientists and decision makers. Data scientists should reflect on prejudice in the population, the sampling method, the quality of data, the construct validity of the data, and the error rates of the learning algorithm.

Sampling methods and error rates are the expertise of the data scientist and these should be explained to the decision maker.

The explanation of correlations is a task of the data scientist. Creating a theory about the underlying mechanism is a task of subject matter experts, including the decision makers.

Not everyone has the time and capability to answer the nine decision-making questions. A judge who takes 30 seconds for a decision about detainment has too little time; a driver using a semi-autonomous driving system has no time.

Yet, to take responsibility for a decision, the decision maker must answer all decision-making questions.  If we introduce AI in decision-making, there are two possibilities.

This means that the real decision maker will, ahead of time, decide that new case data is reliable and that all new cases are structurally similar to cases in the training sample.

If both these options seem unattractive to you, there is a third option:

Reducing bias is not just a matter of introducing AI or improving the learning algorithm. It involves a redesign of the decision-making ecosystem to allow time and provide capability to answer the nine decision-making questions.

[i] David A. Mindell. Our Robots, Ourselves. Robotics and the Myths of Autonomy. Viking, 2015.