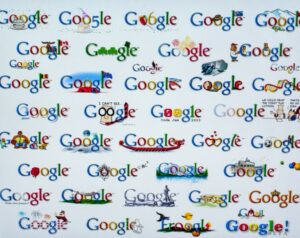 Google is an advertising company that provides targeted delivery of ads to a profiled audience.  It spans all levels of the IT ecosystem that we use at home, at work and in school, from hardware to services. Although it has other revenue models than ad delivery, advertising is its main source of income.

Googles professed mission at its IPO was to improve the life of as many people as possible with technology. This noble goal has since then been repeated in various forms in its yearly financial statements. However, today it has morphed into an evil empire. It now subject to allegations of anticompetitive behavior, unfair use of market power[i] and violations of our privacy.[ii]

The arguments are set out in more detail in a companion white paper, available at www.thevalueengineers.nl.

Since 2015, Google is part of the Alphabet holding company. In this conglomerate, Google is the money-maker and the others are bets that may generate positive revenue in the future, or financial companies that place such bets by investing in startups.

The complete list of subsidiaries of Alphabet and Google is not known. Kamil Franek counted 377 in October 2019, 200 of which were Google subsidiaries.

Google divides its activities in two parts, Google Services and Google Cloud. Jointly, they provide an IT infrastructure for online search, business, home, private life, entertainment, and school. A few services fall outside this classification, such as crisis response services and a person finder in case of calamities. Take your time to study the following schema. For convenience of presentation, I classified Google Cloud as one of the business services. The complete list of Google’s services is ambiguous. Google’s product page lists 81 products but the Wikipedia page of Google products lists almost 150. And there are nearly 200 Google apps on Android.

Google supports a full cycle of daily life. It provides news and satisfies our information hunger, it guides on our way to work, home and holiday, it supports office work, helps us at school, entertains us with games, music and videos at night, and is on its way to transform our experience of the physical world with intelligent glasses.

All these services are free for users. They are financed by collecting data about user behavior, which are then used to construct user profiles that are used to sell targeted advertising services to advertisers.

Google Cloud generated US$ 13B gross revenue in 2020, but with expenses of US$19 to operate Google Cloud, its operating loss was US$ 6B.

The activities of Alphabet outside Google, called “other bets” by Alphabet, had a gross revenue of US$ 1B in 2020 with an operating loss of US$ 3B.

We get a better understanding of Google’s ecosystem if we structure its services in layers, where lower layers provide services to higher layers. A fairly standard layering is one that puts hardware at the bottom, on top of which operating systems run, on top of which apps run, two of which are browsers and app stores. Google’s services are available within browsers.

The following layer diagram adds two more layers and shows companies that provide services in each layer. Let me explain.

The advertising layer is part of the digital advertising ecosystem in which advertisers buy ad space from web page publishers. The governance “layer’ is orthogonal to all other layers because it contains parties that regulate the entire ecosystem, lobby or otherwise influence the regulators, and create perceptions about the ecosystem itself. 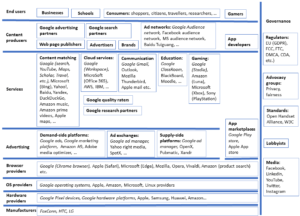 I give a detailed explanation of the ecosystem in the companion White Paper. Here, I zoom in on the revenue models for search and advertising.

The basic revenue model of search advertising is that Google indexes web pages that users search for and sells advertisers space on the answer page.

We make this more precise in a revenue story, a short story that tells us exactly what happens in a search transaction.

We give the final word about the revenue model to a revenue diagram, which tells us exactly who delivers what to whom. The diagram shows that three parties have a need, and that Google satisfies these needs in one transaction. 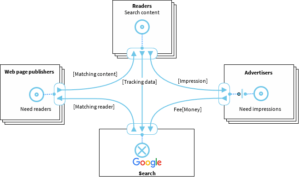 This revenue model has a complicated delivery model in which Google indexes web pages, ranks them according to relevance for the user, constructs use profiles, conducts an auction for ad space, downloads web pages and ads, measures impressions (the user sees the ad), clicks and other actions of the user, and charges advertisers for this. It is in this delivery model that Google is accused of anticompetitive behavior.

In the case of mobile search, this revenue model has an additional partner. Smartphone manufacturers agreed with Google to set Google Search as the exclusive default on their smartphone and in return, receive part of the ad revenue.[iii] Our companion White Paper shows the model.

After you searched for content, you may click on an URL in the answer page and visit a web page. These web pages may want to monetize their content by showing you advertisements, and here Google plays a central role too. Web page publishers may become a member of Google’s display network, for which Google manages the placement of advertisements.

If you visit a web page in Google’s Display Network, Google keeps an auction among advertisers who bid on the ad space of the web page that you are visiting. Here is the value network.

Here is the revenue story in two sentences.

And here we have the revenue diagram that shows exactly who delivers what value to whom. It has the same shape as that of search advertising, with one crucial difference: Google shares the revenue that it receives from advertisers with the publishers on whose pages these ads end up. 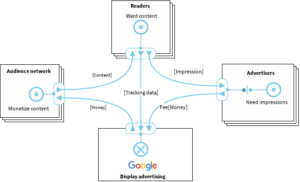 A special case is where Google owns the ad space. Google is not part of it Audience network but owns properties such as YouTube, Travel and Shopping web sites where it can place advertisements. On these properties it displays content directly to Readers.

Because Google Display advertising runs an ad auction to sell ad space to advertisers, it runs a market (the auction) in which Google properties compete with publishers in the Google Audience network.  This is one of the ant-competitive practices that Google is accused of.

The model of in-app advertising has the same shape as the Display advertising model shown above. Google manages the placement of ads in Android Apps and pays the developers in whose apps the advertisements appear.

Google uses a number of other revenue models that are of small importance so far. In-app purchases must run through Google Pay and Google takes a transaction fee of 30% from this. And it sells hardware, such as Pixel smartphones. Jointly, this generated US$22bn in 2020.

Google also sells Cloud services against a subscription fee. This generated US$13bn revenue in 2020. It is growing fast but has yet to make a profit. We show all these model in our White Paper.

What could possibly be wrong with this?

Google tracks our search terms, browsing history inside and outside its properties, app usage, location history and other behavior of users to build profiles, based on which it provides targeted advertising services. Many people don’t like this, but users do very little to protect their behavior from surveillance by Google and other Big Tech companies.[iv]

Part of the problem may be lack of transparency about what Google collects, what it does with this data, and how much it is worth to them. Another explanation of the lack of concern may be that users really don’t care as long as they experience no negative consequences, or at least do not care enough to go through the effort of changing the tracking defaults.

The other flaw in the business model is that Google operates a market, an ad exchange, in which it also participates. This is a true conflict of interest, which is not denied by Google.[v] In the next blog, we will look more closely in the contrast between Google’s stated aim to make the world a better place and the allegations of anti-competitive conduct that it is now facing.

[i] Subcommittee on Antitrust, Commercial and Administrative Law of the Committee on the Judiciary. “Investigation of Competition in Digital Markets.” 2020. https://judiciary.house.gov/news/documentsingle.aspx?DocumentID=3429