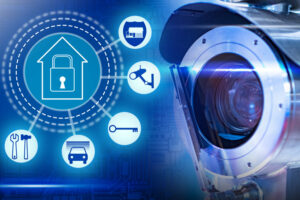 Amazon has created a centralized digital ecosystem in which data is collected about nodes of the network and decisions that affect those nodes are automated. Both the data collection and the decision-making part are subjects of critical discussions among advocacy groups and among regulators. Let’s start with the data collection.

Amazon is a very successful example of what Soshana Zuboff calls surveillance capitalism. Jeff Bezos’ decision in 1997 to turn Amazon in a metrics-based company has resulted in a data-driven company that collects every click and move of every customer on its web site. It monitors performance workers, warehouse workers, warehouse robots, delivery workers, delivery robots, drones, sellers and customers to find opportunities to reduce friction, reduce cost, maximize cash flow and increase shareholder value. And it has been incredibly successful in this.

Amazon sells surveillance technology too. With the acquisition of Blink and Ring in 2017 and 2018, Amazon started offering an increasing number of surveillance products such as doorbells with cameras and a surveillance drone that flies inside the house. It can now collect footage from security cameras around and inside the house, collects speech from the environment of Alexa-enabled devices, monitors the viewing habits of Prime users and registers when you turn a page in an e-book.

Amazon has partnerships with police forces to give them access to footage of homeowners’ cameras.  In 2019 it acquired a patent to fit delivery drones with cameras, by which they could offer surveillance as a service.

Civil rights groups and privacy advocates protest against the use of these devices, as they “turn neighbors into informants and subject innocent people to greater risk and surveillance.”

However, most customers are not bothered that Amazon sells them technology by which Amazon can monitor them and those near them. As of 2019, 100M Alexa-enabled such as the Echo had been sold. Echo devices are microphones that are always on and recognize speech. Somehow, consumers like to have these devices in their living room, but not in their hotel room.

Echo devices have accidentally sent conversations to random contacts. Amazon employees may be listening to conversations, and judges have successfully requested fragments of Echo recordings to use as evidence in court cases. Some advocates claim that kids’ devices with Alexa functionality remember what kids say even after parents delete the conversation. This has not made a dent in the sale of these devices.

There are guides for deleting all data Amazon keeps about you, but this does not keep Amazon from continuing to collect data about you, nor is it clear that all data is in fact deleted that way. And through techniques like Amazon Pay, Amazon collects data about you even if you are not on their site.

What is needed here is more transparency for the user with information, that the user can trust, about the data that Amazon collects about you, plus the right to delete it and have it not collected anymore. Whoever cares about it, should be able to opt out of this data collection scheme.

It is a matter of discussion who owns the data. The data is collected by Amazon and it is about you. Is Amazon the owner of the data or are you? If you are, can you take it with you if you move to another marketplace? Should the new marketplace pay for the use of the data? Should they pay you or should they pay Amazon?

Current regulations such as the GDPR do not even begin to answer these questions.

In his book on Alibaba, Ming Zeng defines

Second, it means that in this value network, the smart business collects data from every node by which it can improve its operations. Improving its operations requires data intelligence, or data analysis, machine learning, artificial intelligence, prediction machines, or whatever else you want to call it. It requires algorithms which analyze the data, find patters by which it can predict the effect of actions. The smart business optimizes its activities using these predictions.

Amazon uses data intelligence to predict consumer behavior, recommend products, analyze speech (Alexa), move its robots around warehouses, control its drones, plan its logistics, place advertisements on behalf of advertisers, and rank search results. Any of these activities depends on a network of actors about which data is collected and about whom decisions can be made, or advice given, by an AI.

The remaining human tasks in a smart ecosystem

There is a curious pattern in Amazon’s smart ecosystem. The way friction is shifted to others seems to be the consequence of the effort to apply AI in order to reduce cost. If technology had the capability, Amazon would replace all warehouse workers by robots, delivery workers by autonomous driving software, and performance workers by AI systems.

But robots, autonomous cars, and AI systems are not good enough to do this. The tasks that remain are what Amazon Mechanical Turk calls, ironically, Human Intelligence Tasks. These are not the interesting tasks that need human insight that makes life interesting. Rather, they are small tasks for which the basic human capabilities of flexible eye-hand coordination, driving in dense traffic, and language understanding are needed.

The application of AI in these cases has led to a proliferation of jobs in which humans are treated as machines. It is in these jobs that stress may drive humans to exhaustion.  These applications reinforce the market power of Amazon that we discussed in a previous blog.

Governance in a smart digital ecosystem

Amazon’s smart ecosystem is centrally governed by Amazon in the service of a frictionless buying experience and maximal shareholder value. To be smart in the service of these goals means to offload friction on sellers, workers, and governments and to steal the best ideas of your customers.

Since this is done in physical geographies, it happens in the territory of national governments, who have goals too, that usually represent the interest of their citizens. But these governments are not part of Amazon’s digital ecosystem and they do not have the data or the means of decision-making that Amazon has.

National or regional governments like the Commission of the EU are developing legislation for the fair use of AI. The EU proposed a regulation for AI systems that identifies high-risk applications of these systems and requires them to be certified according to some standards laid out in the rules. This covers some of Amazon’s uses of AI, such as the warehouse-worker tracking system that can fire people.

But it does not cover systems like Amazon’s dispute resolution system, which consists of AI systems that monitor sellers and performance workers and decides who does and does not satisfy Amazon’s norms. The rule of law is absent there. Sellers should have the right to know why they are banned, should have the option to appeal, and get a fair hearing.

Governments are still struggling how to deal with the automation of decisions that affect physical and mental well-being, safety and dignity of their citizens.