How to Deal with Bias in Artificial Intelligence 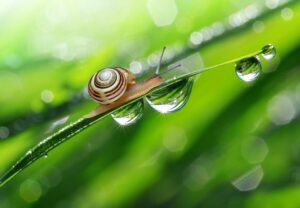 In my previous blog, I reviewed five sources of bias in machine decision-making. Here they are:

The following diagram summarizes these sources. The prediction machine is a piece of software that contains the statistical model constructed by the learning algorithm.[i] 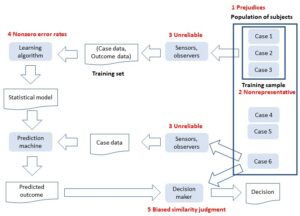 All these biases can be reduced but none can be eliminated in all decisions.  Yet, the tech press suggests that we can fix this and otherwise should stop it. In some cases, the use of prediction machines has indeed been abandoned.

Proponents of machine-supported decision-making point out the benefits of using prediction machines. Algorithms can be made to have less bias than people and, unlike people, they treat cases with the same data in the same way[ii]. Some of them argue for replacing human by machine decisions. For example, Rayid Ghani of Carnegie Mellon University says that “We are still using these algorithms called humans that are really biased. We’ve tested them and known that they’re horrible, but we still use them to make really important decisions every day.”

Scientists have learned how to produce reliable results even though researchers have limited cognitive abilities. Engineers have learned to construct reliable systems from unreliable components. We should use their techniques to improve decision-making too.

In what follows I review nine questions that decision makers should ask when using a prediction machine to improve their decisions. These questions are borrowed from the methodologies of science and engineering.[iii]

(1) Assessing prejudices in the population

(2) Assessing the representativeness of the sample

If the data scientist wants to know about prejudices in the population then their aim is to include these in the sample. But if the decision maker wants to avoid common prejudices then they want to exclude these from the sample. In any case, both need to understand the sampling method and what it means for the relation between sample and population.

(3) Reliability of sensors and observers

Getting reliable data about the sample in the training set may take up 80% of the effort of constructing a prediction machine. Data may have been collected for different purposes, sensors may have been biased and people may have made mistakes and omissions when entering data. Data scientists must summarize data quality issues and decision makers must be aware of this to assess the trust they can put in the prediction machine.

Decision makers must also ask how reliable the data is about the case to be decided.

Some people have a larger budget to spend on health care than others. People who will or can spend less on health will then systematically be assigned to a lower risk category. Machine predictions based on this measurement are biased against patients with a lower health care budget.

The technical term for the match between what decision makers want to know and what the data represents is construct validity. Health care cost is not a valid indicator of the concept (construct) of health risk. Its construct validity is low.

The company that developed the system worked with researchers to find other variables that are better indicators of health risk. According to one report, it was able to reduce bias by 84%. The company also stated that doctors should use their own expertise to make a decision, implying that it is not responsible for any bias in the final decision. This is an exercise in pointing to others that I will return to in my next blog about how to embed prediction machines in the ecosystem for decision-making.

Sometimes, the construct validity of data cannot be improved. In the COMPAS system to predict recidivism of suspects, the decision makers were interested in the likelihood of future crimes. But the data represented arrests, not crimes. Arrest rates depend in part on how heavily a neighborhood is policed and on how low the threshold for arrest is. Not every crime leads to an arrest. And not every arrest leads to a conviction. Arrest data is used because it is what police departments record. But it has limited validity if you want to know about crime rates.

Assessing the limits to construct validity of the data helps decision makers interpret the meaning of machine predictions.

(5) Explanation of the kinds of classification errors made

Any statistical learning algorithm is designed with error rates in mind. Decision makers must understand these error rates when they use prediction machines to make their own decisions. However, explaining these error rates to decision-makers is a daunting task.

Researchers in machine prediction and the developer of the system pointed out that the percentage of true predictions was the same for Blacks and for White. However, regardless what was predicted, the numbers show a higher rate of recidivism for Blacks than for Whites. And that means that there will be a higher percentage of false positives for Blacks.

Second, defining error rates that are non-discriminatory involves making uncomfortable choices. The prediction machine cannot be fair in all possible ways at the same time.

Third, explaining the choice of error rates to decision makers is daunting. The discussions about COMPAS fairness are abstruse.  They cannot be understood by judges, the people who use the system. Yet, they must understand the issues if they are to take responsibility for their decisions.

The world of big data and machine predictions is statistical and we need to do more work to make error rates and risks comprehensible for decision makers.[v]

(6) Explanation of the correlation

For example, the LIME system generates explanations of a prediction by identifying the most important features that contributed to a classification. It does this in a smart ay that works for any learning algorithm. In an example, the classification of an image of a tree frog turns out to hinge on the two red eyes of the frog. Alternative, but less likely classifications given by the system are a pool table with two red billiard balls and of two red balloons.  This information makes the prediction of the system easier to understand for the user — and also removes the magic from machine intelligence.

To see how useful this is, consider a system that predicted that people without fixed telephone lines are less likely to turn up at court. This was a relic from the days when there was no mobile telephony, but decision makers still used this prediction. Had they known which factor explained this prediction, they would have made different decisions.

(7) Explanation of the underlying mechanism

A correlation found among variables in a data set may indicate an underlying mechanism. Or it may be a meaningless coincidence present in the training set.

For example, if a prediction machine diagnoses a likely flu when a patient has headache, fever and sneezes, a physician who uses this machine knows that there is a biological mechanism that leads from the flu to these symptoms.  This increases trust in the prediction.

To trust that a correlation is meaningful, we must believe that there is an underlying mechanism that produces it. Mechanisms consist of physical, biological, psychological, social or digital entities that interact with each other, which produces an effect.[vi] They may be nondeterministic and we may not fully understand them. But at least we must believe that some mechanisms exists that produces the correlation.

For some applications of machine learning, it is hard to imagine any mechanism that could be responsible for the correlation. Prediction if someone is a criminal, gay, or an autist purely based on face images belong in this category.

Knowing which features contributed to a prediction (question 3) is not enough. The decision maker must know that there is an underlying mechanism that explains this prediction. If there is no credible mechanism, then the prediction is not credible either.

When a statistical model is applied to a case, the human decision maker assesses similarity between the case to be decided and the cases in the training sample. If this similarity judgment is based only on the observable features of the case, then conclusions drawn from it are shaky.

For example, the following similarity judgment is based on features only:

What is missing is structural similarity. The mechanisms of thinking present in the brain are absent from walnuts. We are sure of this even if we do not fully understand these mechanisms.

For example, the mechanism that explains the correlation between flu and symptoms like headache, fever and sneezing is not only present in the training sample, it is also present in the patient currently diagnosed by the physician. This justifies the use of the machine prediction in the diagnosis of this patient.

As a counterexample, the algorithm used in the UK to predict school exam results incorporated zip code in its model. Students from a zip code where most students have lower results, where downgraded. However, there is no mechanism that produces a student’s exam grade from the average exam grades in her zip code in the past. As soon as the Office of Qualifications and Examinations Regulation realized this they abandoned the predictions. This illustrates the importance of understanding which factors contribute to a decision (question 3), identifying whether this is a coincidence or based on a mechanism (question 4) and assessing whether this mechanism is present in the case to be decided (question 5).

Nine questions to ask when using a prediction machine

The following diagram shows how the questions are related to the different sources of bias. 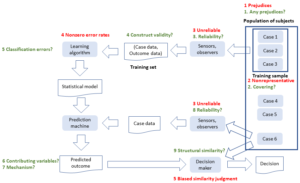 I summarize each question in a number of variants.

This leads to the undesirable conclusion that automation makes decision-making harder. This is annoying. Machines should make life easier. They can always do something much better and faster than people, or they can do something that we could not do at all.

This is true for prediction machines too:  Statistical leaning algorithms can recognize patterns in data where we cannot. They can make correlations visible that we cannot see. But they can also make correlations visible that are meaningless or irrelevant. And this means that we have to think about the meaning and relevance of correlations, which means we have to go through the nine decision-making questions listed in this blog.

Using prediction machines to make decisions can make decisions better or worse, depending on the quality of the population, sample, sensors, observers, data set, learning algorithm, and decision maker. To make them better and not worse, the decision maker must answer the nine questions listed above.

But which decision maker has the time and capability to do so? A judge who takes 30 seconds for a decision about detainment does not take time to answer these questions. And who is the decision maker anyway? The art of slow decision-making may be noble and but impractical.

This leads us to the design of the decision-making ecosystem. Who is involved in a machine-supported decision? How are the tasks divided over the participants? Who bears which responsibility? This is the topic of my next blog.

We use cookies to ensure that we give you the best experience on our website. If you continue to use this site you agree we use cookies.Ok