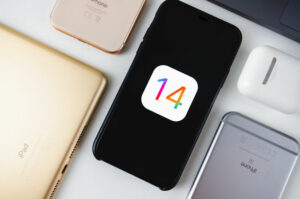 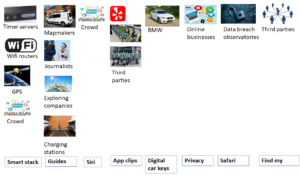 iOS 14 allows you to stack up to 10 widgets on your home screen and offers a context-sensitive smart stack feature that shows you the most relevant widget on top, depending on your location and the time of day. This requires interfaces with time servers and location providers such as GPS and Wifi routers. And to learn which one to put on top, it needs a crowd —possibly containing you— to label apps as relevant.

Siri has been extended to send audio messages as well as dictated texts, which requires the services, once again, of a crowd to assist it in machine learning.

Apple clips are small parts of an app that can be executed without downloading the entire app. Downloading the clip takes a few seconds and after execution, it disappears. This is useful for ordering a restaurant through Yelp, renting a shared scooter etc. This requires interfaces and agreements with third party providers of apps of which a clip is downloaded.

iOS 14 offers digital car keys by which you can unlock your car through your iPhone or Apple Watch. The service will be available for BMW 5, and more models are expected soon. This requires agreements with car manufacturers and secure interfaces to car models. Further integration with car user interfaces is expected.

Apple had planned to ask the user permission for tracking the user by any app. This would be a great feature for preserving privacy, but after pressure from advertisers and app developers, the feature is delayed. Clearly, the feature would make Apple thrive even more, but it would make the Apple ecosystem less attractive for the many businesses whose survival and well-being depend on it.

Safari will contain a password monitoring feature that warns you if one of your passwords has been involved in a known data breach. If it finds a breach, it lets you know and it generates a new password for you.

Third parties will be able to use Apples Find My feature. This will allow users to track devices on their Apple devices using the Find My app.

All these improvements to iOS services extend Apple’s already huge value network by integrating these services with those of other business actors.

A user ecosystem consists of the people and devices on which the user depends for their survival and well-being. This includes the user’s friends and family and, in Apple’s world, a smart home system.

Apple maps allows you to share your estimated arrival time (ETA) with your friends and family. Digital car keys can be shared with friends and family, and Apple One lets users buy feature bundles that can be shared through Apple’s Family Sharing system with as many as five others. Family Sharing also allows you to share in-app subscriptions and purchases with your family members. HomeKit and the home app has some new features for Apple’s smart home platform.

All in all, Apple will support you when you drive home, play with friends, and switch off the lights before you go to bed.

Apple has capitulated to demands from its users to set rival company software, such as Google’s Gmail or Mozilla’s Firefox, as default apps. iMessage has been extended with functions that users know from Facebook’s WhatsApp, such as discussion threads, and it will finally introduce a translation app, as users are familiar with from Google. The library of Memoji’s has been extended to agree with cultural values shared by many users and it includes extensions with face masks.

In short, iOS 14 updates Apple’s experience ecosystem to agree a bit more with the world outside the Apple ecosphere.

Create value through your ecosystem

Developing an update of iOS amounts to

This requires coordination and agreements among a host of actors. Writing the software to create new user experiences is the last step in this process.

This story illustrates that to create business value from software, you must enhance your ecosystem. And when you enhance your business ecosystem to offer more value to users, don’t forget to also improve the personal ecosystem of your users, and of the experiences of your users.