The Business Models of Apple Pay and Apple Card 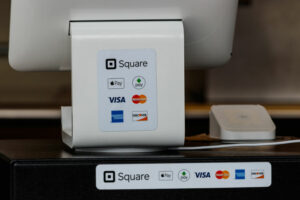 Last year, Apple introduced the Apple Card, a titanium credit card with a virtualized counterpart on iPhones and other Apple devices. Apple Card in turn uses the Apple Pay service, a user interface for existing credit cards such as Visa, MasterCard and American Express and now also for the Apple card. What is the business model of these payment services? Why would Apple, which earns money from high-end consumer computing devices, want to enter the payment industry? In this blog we present the business models of Apple Pay and Apple card and speculate on the strategy behind this move. A companion White Paper gives more detail.

The analysis in this paper is based on public information found on the web. If you think we have misinterpreted the information that we found, or that we missed important information, please contact us at info@thevalueengineers.nl.

The basic scenario that any payment scenario supports is that a customer buys a product (a physical good or an intangible service) and pays for it. In the simplest case, the customer pays with cash. But if the customer uses Apple Pay, a complex payment infrastructure comes into play. The next diagram shows the core stakeholders in this infrastructure.

In addition to the Apple Pay services, a credit card association such as Visa or Mastercard is involved. The merchant has an account with an acquiring bank, which processes its credit card transactions, and the cardholder with the issuing bank, the bank that issued the card. Issuers and acquirers may outsource processing tasks to other companies, and some credit cards, such as American Express, are issuers themselves. But we ignore these complexities here as they are not needed to understand the business model of Apple Pay.

The payment infrastructure provides several services to the primary stakeholders, the cardholder and merchant, as illustrated in the following diagram.

The issuer, card associations, and acquirer are part of the standard credit card infrastructure that provides the following services.

On top of this traditional payment infrastructure, Apple Pay provides convenience to the cardholder and security to the issuer. Cardholder can scan their credit card with their iPhone, which can then securely stored in an iPhone, Apple Watch or other Apple device. Instead of remembering a PIN or having to show a photo ID, cardholders identify themselves with fingerprint or face ID. If the iPhone is lost, it can be locked or even wiped with Find-my-iPhone functionality.

These services cost money, shown in the next diagram.

For the service of delayed payment, the cardholder pays interest. For the services of the payment infrastructure, the merchant pays fees to the issuer, card association and acquirer which can add up to 2 – 3%. In other words, the cardholder pays the price plus interest and the merchant receives the price less the fees. The difference is revenue of the infrastructure businesses.

Part of the interchange fee is passed on by the issuer to Apple Pay, because the cost of fraud and theft of credit cards will be lower when cardholders use Apple Pay. Apple takes 0.15% of the transaction in the USA but much less in Europe, because the interchange fee in the EU is much lower than in the USA. A reasonable estimate is that world-wide revenue of Apple Pay is about US$1B in 2020. This is peanuts compared to Apple’s net revenue of US$55B in 2019. So why would Apple want to offer Apple Pay?

We could identify four strategic reasons for Apple to move to Apple Pay.

Apple Pay is a first step into the payment ecosystem that opens the door to much more.

In a cooperation with Mastercard and Goldman Sachs, Apple introduced Apple Card in 2019. This is a major extension of the presence of Apple in the payment infrastructure, as shown by the following value network. 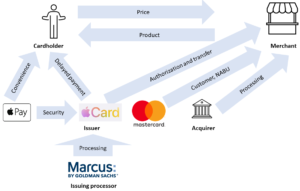 Apple card issues a credit card, using the online bank Marcus by Goldman Sachs. Marcus is a digital platform for online consumer banking started by the investment bank Goldman Sachs. Apple is a non-bank credit card issuer like many others, such as AT&T, General Electric and Ford. It offers special discounts (called “cashback” in the USA) if you buy Apple products or use Apple Pay. However, the Apple card can also be used as physical card without Apple Pay.

Apple Card uses the Mastercard network. This is not visible to the consumer, because the titanium Apple card only displays the Apple logo and the consumer name.

Apple Card’s profit model is similar to that of other issuers. 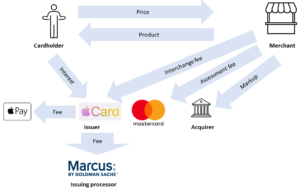 Interest on consumer credit provided to consumers is not different from what other issuers charge, viz. 13-24% depending on credit status and payment behavior. The Apple Card cashback scheme is similar to that of competitors too. An early speculation on the revenue for Apple estimates that Apple card will generate US$1B in 2020, increasing to US$5B in 2022. Some of this will have to be shared with Goldman Sachs.

What could be the strategy of these three key players behind Apple Card?

Goldman Sachs is currently not interested in Apple Card’s profitability but in growing a loyal consumer base for its startup, Marcus. Using the Apple brand and the appeal of the sleek titanium card with the Apple logo and consumer name, Apple Card attracts an affluent consumer base to which it can offer other products later on. Apple has promised not to collect any payment data of consumers, but Marcus does have the data and can analyze it for its own use.

The Apple card generates more traffic for Mastercard. Since Visa supports the Amazon card, it makes sense for Mastercard to move with the flow of tech companies entering the payment ecosystem.

Apple Card keeps Apple users even more glued to their Apple devices than they already are. True to form, Apple offers a superb interface in which users can see on Apple maps at which merchant they used the Card, where this merchant is located, and when they used the card. As a useful side effect, all merchants that accept Appel card must register themselves on Apple Maps.

And it offers financial management software by which users can see how much they have spent, on what products, and what they should pay to Apple before which deadline.

Apple is now a competitor with other credit cards in Apple Pay’s wallet. This gives it even more leverage on other issuers. Convenience may steer users to use Apple Card rather than the other cards.

Gaining experience with Apple Card also prepares Apple for other financial products, such as debit cards and plane tickets, and all other tickets that you use a physical wallet for. Integrating this with Apple Maps and its home appliances, this creates a sticky ecosystem of currently about 1B users that covers their behavior at home, on the road and in shops. If all of these would use Apple card, this would put it in the same league as Visa (3.4B cards). At the same time, because Apple guarantees incompatibility with Android devices, this creates a stable market for Apple devices.