The Myth of Frictionless Commerce 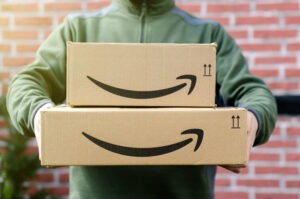 One of the promises of e-commerce has always been the removal of middlemen, which would lead to frictionless commerce. Producer and consumer would find each other and transact without cost.

However, the removal of middlemen did not remove costs. It merely shifted them to other places where they are nearly impossible to control.

What frictions exist in transactions facilitated by Amazon? How is this distributed among stakeholders? Let’s look at a number of examples.

The Verge reports that the Amazon product review system has led to an arms race among sellers to be listed before others. Relatively innocent is that some sellers ask buyers to change a negative into a positive review in return for some money.

More vicious is that some sellers buy a competitor’s product, set it on fire, take a photo of this and then complain to Amazon that the competitor’s product explodes. This may lead to the removal of the seller —the one whose product was set on fire — without notice.

Whatever the reason for removal, the complaint process is opaque. The Verge reports:

“The Performance team, which handles suspensions, has no phone number; there’s no one to ask for clarification. The only way to interact with them is by filing an appeal, and when it’s rejected, sellers often have no idea why. Sellers can call another Amazon department, Seller Support, but those workers can’t provide information about the Performance team and can offer only generic advice about what the seller might have done wrong.”

Former Amazon employees report that an algorithm flags sellers based on a range of metrics, such as complaints, returns, reviews and other variables. Performance workers in India, Costa Rica and elsewhere must process one claim every four minutes and they must choose boiler plate blurb to send to sellers. Performance workers know they do not describe the actual problem. But when they reinstate a seller who is later suspended, this counts against them, so they are incentivized to suspend sellers. When they fall behind, they send requests for more information to save time. The complainant may then see a request for information already given, or for information unrelated to the case.

The result is that sellers see their business disappear for reasons they do not understand, and then get lost in a Kafkaesque bureaucracy where people behave like machines and it is impossible to actually talk to a human.

The friction for sellers to join the marketplace is very low, but the friction to resolve disputes is very high.

In 2013, the BBC reported that Amazon workers faced increased risk of mental illness and in 2018, The Verge reported that 74% of warehouse workers skip bathroom stops for fear of missing their targets. In 2020, the N.Y. State attorney deemed Amazon warehouse safety inadequate.

In 2018, Senator Bernie Sanders proposed a “Stop Bezos” act, which would tax companies like Amazon and Walmart for the cost of employees’ food stamps and other public assistance. In response, Amazon raised its minimum wage to $15/hour.

In 2019, the Guardian revealed that schoolchildren as young as 16 years of age worked overnight for Foxconn, supplier of Alexa devices, for “gruelling and illegal hours.”

Bottom line is that warehouse and delivery workers are monitored in real time, costs are minimized, and productivity targets are set so high that workers complain about physical and psychological stress. This is an operationalization of a relentless striving for reduced cost and increased shareholder value.

Amazon resists unionization, which we interpret as another symptom of the effort to reduce friction for Amazon. By keeping labor unions out of the door, Amazon reduces its friction with workers.

However, workers do experience a lot of friction Amazon and unions indicate that they will not give up. The royal way forward here is to allow workers to organize themselves and let them negotiate fair working conditions.

Yet another resource exploited is the natural environment.  The climate impact of providing half of the world’s cloud computing capacity and transporting a huge number of small packages to consumers, and returns transported back to warehouses, generates a lot of CO2. Amazon has environmental and sustainability goals. It will buy 100 000 electric vehicles from Rivian and announced a $100M reforestation fund. It started a Climate Pledge Fund, a venture capital fund that invests in technology to facilitate the transition to a low-carbon economy.

These are excellent initiatives. But they are not enough to counterbalance the growth of Amazon itself. In 2019, Amazon’s total carbon footprint rose 15%.  It emitted 51.17 metric tons of carbon dioxide in 2019, the equivalent of 13 coal-burning power plants running for a year. Investors complain about lack of transparency of climate impact. Employees staged a walkout in protest of Amazon’s environmental policies. There are now reports that Amazon destroys millions of unsold stock every year, another environmental waste.

Amazon seems to want to have its cake and eat it too and to look to new technology to do more cloud computing, transport more packages, handle returns more efficiently, and at the same time reduce its carbon footprint. This ignores the fact that cloud computing and package logistics necessarily create friction with the planet.

A quick win to reduce this friction by Amazon itself would be to include the price of carbon emissions in Amazon logistics and to stop its policy of free returns. Carbon emissions can be reduced by bundling packages in bigger chunks, which leads to less transport movements, and by reducing the number of returns to, ideally, zero.

Related to public infrastructure is public safety. Dense traffic of vans racing to achieve their performance targets increase unsafety in the streets.

And it increases pollution too. The Guardian reports that Amazon warehouses are located in low-income regions with relatively high levels of pollution. Dense traffic consisting of a large number of vans carrying small shipments increase pollution in these areas. One-day shipping for Prime members increase this pollution further.

Public infrastructure, safety and clean air are public goods for which, in most countries, governments are responsible.

Tax, in the view of many companies, is just another kind of friction to be eliminated. It is a matter of definition whether companies like Amazon avoid paying taxes. They simply exploit loopholes in tax laws and they don’t seem to do anything illegal.

The EU recently lost a court battle with Amazon to recoup  €250M in back taxes from Amazon. Amazon had a sales income of €44B in Europe but paid no taxes in Europe. The court case showed that this was not illegal. In the US, Amazon is alleged to pay no taxes either but the company here too states that it is abiding by the rules.

The resolution is clearly to improve tax laws, for example, by demanding a minimum fee.

Where did all the friction go?

The following diagram shows that friction has been shifted to other stakeholders in Amazon’s ecosystem, away from Amazon and its buyers. 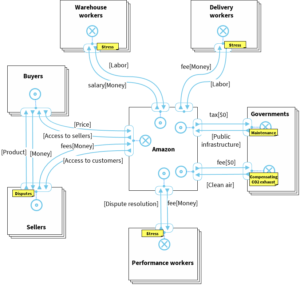 These are social and physical frictions in the transactions facilitated by Amazon. The purely economic costs of searching, bargaining and enforcement are low for the buyer but high for the seller, for they must pay to get found, must offer lowest prices to get found by byers, and must suffer Amazon’s opaque rule enforcement.

The questions for each of the stakeholders in the diagram are:

These are questions about the moral economy of an ecosystem.

Health care experts can assess the amount of physical and psychological stress experienced by workers. But the questions (1) whether this amount is morally acceptable and so should be allowed, and (2) whether, if allowable, it receives fair compensation, can only be answered within a framework of morality. If you find it acceptable if a worker experiences joint wear after 40 years of physical labor, you may still find it unacceptable that this happens after 2 months.

By shifting friction away the way it did, Amazon has made moral choices. As a result, Amazon’s costs are relatively low.

Amazon is able to shift friction to other stakeholders due to its market power. The relation of Amazon to delivery workers and performance workers has some similarity to the 18th century putting-out system, in which pieces of work were put out to home workers to bypass the guild system. In the case of Amazon’s relation to delivery and performance workers, this seems to have the goal to bypass labor regulations.

Warehouse workers are employees but Amazon opposes labor unions which could work to improve labor conditions. This battle isn’t over yet.

The situation of sellers is different. Amazon has something close to a platform monopoly for sellers. Amazon marketplace is a matching platform that connects two market segments, buyers and sellers. Unlike traditional companies, which serve one market segment, platforms serve two or more market segments for which they perform a matching function.

In the case of Amazon, rents are extracted from sellers by capturing high transaction fees and offering lousy (cheap) dispute resolution. This can be resolved partly by new antitrust law that requires transparency about the allocation of revenue to its sellers and partly by demanding minimum standards for a rule of law for dispute resolution in its ecosystem.

Tax avoidance seems to be a game played by all large companies. It is not a consequence of market power but of the ability to hire expensive tax specialists. The only way to deal with it is to improve tax laws, as the G20 is intent on doing.

Standing back, we see that dealing with market power is a governance problem. In the case of Amazon, we need to find governance structures in which a central actor cannot misuse its power to extract value from and shifts costs to other ecosystem participants in an unfair way. The way to do this is to improve legislation and allow workers to organize themselves.

This is one way Amazon extracts value from its ecosystem. The other way is cross-layer subsidies, which we will discuss in the next blog.