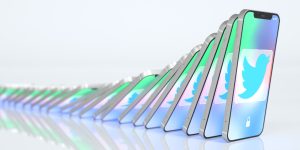 Elon Musk’s messing around with Twitter is an illustration of what is wrong and unsustainable about the modern economy. We may be fascinated by the way Musk is ripping Twitter to pieces. But demanding that a company make positive revenue is not asking too much. It is not a crazy idea of Musk to expect that Twitter make a profit 16 years after its founding.

The problem is that journalists, politicians, celebrities, trolls and conspiracy theorists have become accustomed to a resource that is available 24/7 and allows them to broadcast messages for free to a public of 200M daily users. And the users have become accustomed to a free spectacle of nearly 900M tweets per day. This is a metaphor for the modern economy: We want things for free, immediately, without being constrained in our behavior or confronted with their cost.

In this blog, I look at Twitter’s business model, then show how this characterizes the modern economy and finally make a plea for networked business models to make the true cost of value propositions apparent.

Twitter has made a loss since its IPO in 2013 until 2018. It then had two profitable years, sinking into loss again from 2020 onwards (Business of Apps, Twitter Revenue and usage Statistics (2022)). In the same period, it has seen a steady user growth to about 450 M today. This is small compared to giants like Facebook but still, 450 M people can generate a lot of monetizable clicks. Most of Twitter’s revenue comes from advertising (92%).

The problem is that Twitter does not provide a sufficiently brand-safe environment to attract enough advertisers to write black numbers. The message format invites hit-and-run insults, hate speech and misinformation. Since Musk took over, user growth has seen an all-time high and there has been a spike in hate speech, racist tweets and fake news, which adds fuel to the fire. This has made advertisers even more wary.

To be successful as a platform, Twitter must ensure that users attract sufficiently many advertisers to fund the platform. So far, this has been problematic, despite spending a considerable part of its operating revenue on creating a safer environment for advertisers.

To sum up, Twitter’s value proposition is attractive for journalists, politicians, celebrities, conspiracy theorists and trolls, but not attractive enough for its paying customers, advertisers. It has created a network in which 10% of its users generate 92% of the tweets. The value of these tweets is in the excitement they create. Its delivery model is optimized to increase this excitement.  Its revenue model is based on advertising, but advertisers are wary of the unsafe environment of Twitter’s inventory. This is not a sustainable business model.

How is this a metaphor for what is wrong with the modern economy? Simple: Twitter is a network that offers free and immediate gratification of our needs, but it loses money doing so. The technology to deliver its value proposition contains mechanisms to continue this situation. Consequences of user actions happen far away in the network. Users are happy with the service and feel no constraints in using it. But in the long run this is not sustainable.

This is a particular configuration of the four parts of a business model that we not only see in the case of Twitter but in other parts of the digital economy too, as well as in other sectors of the economy. Here are the four parts:

The problem with Twitter’s revenue model is that they did try to reduce the amount of negative experience, by which their R&D costs where higher than their revenue could support.

To give another example from the digital economy, Amazon Marketplace offers a very attractive proposition to a large market, namely frictionless buying from a huge catalog, fast delivery, and free returns. Its value network contains sellers who can barely survive in a race to the lowest possible prices, warehouse and delivery workers who are overworked and underpaid, and so-called performance workers who have impossible, stress-generating targets in resolving conflicts between buyers and sellers. Its delivery model generates stress and strain among workers, generates greenhouse gasses and uses public infrastructure for which it pays no taxes [Wieringa & Gordijn, To Appear].

An example in another sector is the fashion industry, which offers a value proposition that attracts large numbers of consumers, has a far-flung value network that contains forced labor, child labor and poor working conditions in low-income countries and pollutes the environment, contains mechanisms to perpetuate this cycle, and does not account for the true cost of producing new clothes and destroying discarded clothes.

Another example is the high-tech industry, which depends on rare metals extracted in far-away mines under poor labor conditions without regard for the environment, which remain conveniently out of sight of end-users and are not accounted for in the price of the gadgets we use, and a delivery model that perpetuates this under the veil of secrecy [Abraham 2015, Pitron 2020].

The True Cost of a Value Proposition

You can amuse, or at least engage, yourself with finding yet other examples of this unsustainable business model configuration. The examples above should convince you that to create fair business models, we need visibility of the entire value network, including its delivery mechanisms, and incorporate all costs that this engenders in the revenue model.

The True Price Foundation has made heroic attempts to estimate the true price of products, that includes all costs. To make the computation of the true price transparent, we need visibility of the networked business model behind a value proposition.

What is the True Cost of Twitter? The social cost of a barrage of hate speech, insults, misinformation, fake news, racism, intimidation, and political manipulation is hard to quantify. But by trying to do something about this, Twitter discovered that the operational cost of the R&D needed to search for solutions, outweighed its revenue.

Musk is right in demanding that Twitter make a profit. But he is wrong if he thinks this can be achieved by reducing efforts to stop flooding the space with shit. If he does this, the real cost of Twitter will increase but it will not be accounted for in its revenue model.

David S. Abraham. The Elements of Power. Gadgets, Guns, and the Struggle for a Sustainable Future in the Rare Metal Age. Yale University Press, 2015.

Guillaume Pitron. The Rare Metals war. The Dark Side of Clean Energy and Digital Technologies. Scribe, 2020.