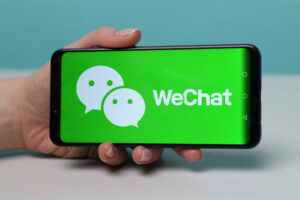 WeChat is the operating system of daily life in China. It offers instant messaging, social networking, entertainment, payment, shopping, third-party services, government functions and intelligent home functions. The end to its growth in services is not in sight.

The WeChat ecosystem is a fascinating example of how you can monetize the presence of over 1 billion users. WeChat is relatively unknown among the public at large in the West. This needs to change, as Western Big Tech is trying to imitate it.

In this blog I give an overview of WeChat, its services and its ecosystem business model. In the next blog I will discuss governance of the WeChat ecosystem. Both blogs are based on a freely downloadable White Paper.

WeChat is a subsidiary of Tencent, the Chinese technology conglomerate that offers messaging, social media, entertainment, e-commerce and other internet services. WeChat, and its Chinese version WeiXin, offer the mobile version of these services. It has 1.2 billion monthly active users, mostly in China. Outside China, Chinese tourists, the Chinese diaspora, and businesses who want to deal with Chinese people, use WeChat.

Tencent generated RMB 377B (€ 49B) in 2019, which puts it in the same league as Facebook. The contribution of WeChat to this revenue is not known. Most of Tencent’s revenue (30%) came from gaming, in particular in-game transactions and advertisements.  Another 23% came from value-added services such as selling stickers and other products. 22% came from fintech, 18% from advertising and 2% from cloud and other services.

The following diagram shows the functions of WeChat. Starting with instant messaging and going clockwise, this is roughly the order in which they were added. 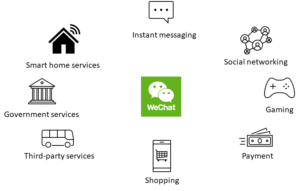 For Western readers, I should point out the important role of QR codes in the WeChat interface. You can generate a QR code for your name card, which can then be scanned by others to add you to their friend list. Merchant can attach QR codes to their products, which buyers can scan to pay for the product. This can even be in the form of a simple sticker pasted to the physical product in a shop. This reduces friction by not having tot type in Chinese characters.

The push-to-talk method of chatting, which allows you to send a voice message just by holding a button, is popular for the same reason.

WeChat has agreements with a great many partners to offer payment services, shopping, third party services and home services. And it has started to offer government services too, such as offering an electronic ID system and applying for a visa. 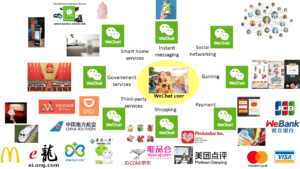 The above diagram is incomplete. Yet it illustrates that WeChat is ubiquitous in Chinese daily life. There are 1.66B mobile phone accounts in China, which means that many of its 12.4B citizens have more than one mobile phone. 95% of Chinese citizens aged 16 to 64 own smartphones and 78% of those use WeChat.

WeChat has amassed a large user base with free services and monetizes it by charting fees to various actors in its ecosystem. For its users, WeChat is a communication channel and an entertainment platform. For businesses, it is a payment and distribution channel, as well as an attention grabber for its users. Businesses pay for the following services:

• Transactions. WeChat receives a transaction fee from in-game purchases of avatars, weapons etc. Shopping and buying third-part services generate transaction fees as well.
• Advertising. WeChat sells the attention of its users by getting a cut of the sale of inventory (advertising space). Advertising is not the primary source of income though.

A third source of income is sales:

• Sales. WeChat itself sells digital products like stickers. Businesses have to pay a yearly license fee to allow them marketing and sales on the WeChat platform.

WeChat is diversifying its services into insurance and health care. It is developing WeChat for Auto. Further expansion into the Internet of Things is also aimed for.

This blog only scratches the surface of the WeChat ecosystem business models. In our accompanying White Paper we give a lot more detail.