Social Networks Must Be Interoperable 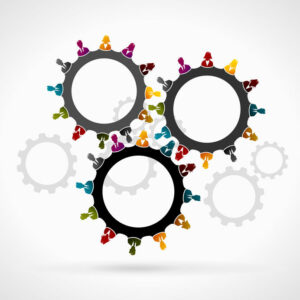 To break the monopoly of social networks, they need to be interoperable so that users can move from one social network to another easily, without loss of quality. Competition requires interoperability. This worked well for 19th century railroads, for AT&T, and for telecom providers. And it will work well for social networks.

However, current proposals by regulators in the U.S. and the EU fall short of this goal and will therefore fail to create competition among social networks. Regulators need to be educated on the need for interoperability.

In this blog I summarize the problems caused by network monopolies, review the solution proposals by regulators, and give a call to action.

What is the problem?

They monetize user profiles in two ways. (1) They sell user attention to advertisers by matching advertisements to users.  Facebook generated US$71 billion revenue in 2019 this way. (2) Some social networks such as Twitter and LinkedIn additionally sell user data, by providing paid access to user profiles.

The analogy with gold mines breaks down on one important point. Where physical gold mines cannot increase the volume of resources in the ground, and extract a resource until it is depleted, social networks can attract new users to grow the resource which they are exploiting. They will never deplete this resource.

Social networks exploit a resource that cannot be depleted and which they can increase by feeding it content. That is better than a gold mine.

To maximize their resource, each social network has restricted interaction among people to users of their network only. If you want to send a message to a Facebook user, you must be a Facebook user too. Social networks monopolize communication on their platform. Contrast this with telecommunications providers, who must connect users across networks.

If switching costs are high, as they are now for social networks, then positive network effects tend to lead to a network monopoly. If new entrants are bought or killed, then the monopoly is preserved. The complaint filed against Facebook by 48 states in the U.S.A. recounts in detail how Facebook did this. Surprisingly, this is easy reading and I recommend it to anyone who wants to understand Facebook’s mission and strategy.

When a company is free from competition, it is free to do bad things

If there is no competition, then a company is free to do bad things. For example, a social network without competition may raise the tariff for targeted advertising. It may publish reports that their reach is bigger than that of any other network. It may brag about the quality of their matching algorithms but keep secret how it works. It may violate privacy constraints in order to collect more user data but hide that they do this in impenetrable legal prose. It may send users misinformation, hate speech and fake news if this resonates with them and increases their engagement.

With competition, companies will increase quality

By contrast, when there is true competition, users could switch to a social network that provides the quality they desire. For advertisers, acceptable prices. For users, acceptable and understandable privacy policies. No hate speech, disinformation or fake news. Properly acknowledge sources, no manipulated images, and an interesting diversity of news. With true competition, networks could distinguish themselves on one or more of these qualities.

And they may choose other business models. Some may use a flat rate subscription model with a fair use policy. Others may choose for a pay-per-use policy. Or advertising in combination with redacted content. There are many possibilities.

But data portability is not enough. Social networks should be interoperable too. If a user moves to another network, he or she should still be able to communicate with their friends on the old network.

Interoperability also requires interconnection protocols that define what information can be transferred across networks. Information not covered by these protocols will be lost in transition. This is a good thing for competition: It may become a reason why people move to a network where they can communicate with each other using data formats and interaction techniques that they desire. They may for example move to a network with supreme video editing functions. Others may move to a network which guarantees absence of hate speech.

Interoperability creates an environment of globally defined protocols within which platforms can compete for customers. We are familiar with these environments. The internet grew big in it.  SMTP enabled email, NNTP enabled network news transfers, HTTP enabled hypertext transfer. These protocols defined environments within which companies could compete on providing email, news, or browsers.

Interoperability creates a level playing field on which companies can compete for customers. Power is decentralized.

What are the networks doing?

In 2018, Apple, Facebook, Google, Microsoft and Twitter started the data transfer project to build a common framework for data transfer across online platforms. On December 2nd, 2020, Facebook announced the first result, the ability for users to transfer photos and videos to Google photos.

This is a good first step, but a lot more needs to be done before users experience low friction in moving their data from one social network to another. And we should not forget that moving data to another network includes not only copying it to the new network but deleting it from the old.

In 2019 Jack Dorsey announced a project which would explore the possibility of transforming Twitter in a protocol. This is an excellent initiative. But it should be expanded to include all social networks, not just Twitter. But we need regulators to realize this expansion.

What are the regulators doing?

In 2019, senator Warner introduced a bill in the Senate that requires data portability of large social networks — networks with more than 100 000 000 monthly active users in the U.S.A. The bill is under review and needs to pass the Senate, the House and the President before it becomes law.

On December 15th, 2020, the EU published a proposal for a Digital Market Act in which data interoperability is demanded from social networks with more than 45 000 000 monthly active end users and more than 10 000 yearly active business users (Articles 3.2(a) and 6(h)).

All of this shows that regulators are moving in the direction of data portability and that social networks are anticipating on this.

But movements on interoperability are slower and more hesitant. The report on digital markets by the Subcommittee on Antitrust of the Committee on the Judiciary of U.S. House of Representatives, published October 6th, 2020, discusses the role of interoperability in promoting competition. But this still needs to be translated into law.

The EU proposal for a Digital Markets Act, mentioned above, only requires interoperability of platforms with providers of ancillary services, but not between the core services of social networks (Article 6(f)). This is a missed opportunity and must be repaired.

Germany is working on a law which does require interoperability of core services. However, the Digital Market Act proposal prohibits EU member states to put demands on social networks that go beyond what the DMA itself demands (article 1(5)). This is a failure of the DMA proposal that must be repaired.

Arguments of social network lobbyists that consumers have a choice, that social networks make the world more open and connected, that they support small businesses, and that monopolists are innovative, are false and misleading.

Consumers are not free to choose a social network. Social networks are closed and disconnected from each other. Small businesses cannot avoid doing business with networks that charge extremely high fees. And monopolists don’t innovate. They buy innovative startups or kill them.