With 1.2B mostly Chinese monthly active users, WeChat is the operating system of the daily life of the vast majority of 1.4B Chinese people. It offers instant messaging, social networking, entertainment, news, payment, shopping, third-party services, smart home services and government services to its users. How is such a complex ecosystem governed?

This blog is an excerpt of a White Paper about the business models and governance of the WeChat ecosystem.

The following diagram gives an impression of the size of WeChat’s ecosystem. It is incomplete but it mentions the most important categories of ecosystem players. There are more companies of each category, and additionally there are marketing firms and consultancies who advise others about how to enter, survive and thrive in the WeChat ecosystem. 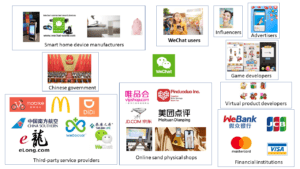 Let’s look at two aspects of WeChat ecosystem governance, (1) the closed nature of the ecosystem and (2) the role of the Chinese government.

WeChat blocks access to competing ecosystems such as that of AliBaba and ByteDance. For example, it blocks links to the shopping website TaoBao and the retail website TMall, both owned by AliBaba, and to the new website Toutiao, the video sharing site Douyin (TikTok) and the video platform Xigua, owned by ByteDance. In Januari 2019 it blocked three apps on the day they were launched: Liantianbao, formerly called Bullet Messenger, Duoshan, launched by ByteDance, and Matong MT, launched by Ringo.AI. (Some websites have published ways to get around these blocks.)

These competing ecosystems return the favor by blocking access to any app that lives in the WeChat ecosystem. Apparently, Chinese platforms build closed ecosystems. As a consequence, they seem to end up in the mutually detrimental square of the Prisoner’s Dilemma’s payoff matrix: They are both worse off than they would have been by cooperating. The fear of betrayal motivates mutually hostile behavior.

Kai-Fu Lee describes the intensively competitive Chinese business landscape in which this takes place (K.-F. Lee, AI Superpowers. China, Sillicon valley, and the New World Order. Houghton Miflin Harcourt, 2018. ) Chinese companies ruthlessly copy each other’s successful ideas and put a moat between them and their competitors. Any company that cannot fully insulate itself from competitors is a target for attack (p. 43). As a result, Chinese companies tend to take over an entire value chain (p. 71). For example, the ride haling company Didi ChuXing has started buying up gas stations and auto repair shops to service its fleet.

As a consequence, if you enter WeChat’s ecosystem Tencent, WeChat’s mother company, exercises centralized governance over you. Tencent has shares in as few dozen game developers such as in Riot games (100%), Grinding Gear games (80%) and the maker of Fortnite, Epic (40%). It has 12% of Snap (of SnapChat), 5% of Tesla and 5% of ActiVision, maker of call of Duty. It owns 20% of Meituan Daiping, 17.1% of JD.com, and an estimated 30% of WeBank. Tencent owns 1.6% of Warner Music Group and at the time of writing (March 2021), has just signed a cooperation agreement with Warner to launch the record label JV as a joint venture.

An ownership network showing the shares Tencent has in companies that participate in its ecosystem would reveal a lot about the distribution of decision power in the ecosystem.

The role of the Chinese government

In private enterprises, just as in state companies, the Chinese Communist Party is the ultimate authority. Both domestic and foreign private companies must contain a party body and the Chinese Communist Party (CCP) is now demanding a seat in executive rooms. Chinese citizens and companies are required by law to participate in “intelligence work”, regardless of geographical companies. This means that they must provide information to the Chinese government, and that this obligation is extraterritorial.

The government’s influence on the WeChat ecosystem consists of three parts: Surveillance, censorship, and manipulation.

WeChat collects a trove of data about citizen behavior and is an ideal instrument for state surveillance. It stores search terms, profiles visited, and content that has been viewed within the app, call times, call duration, and location information. Chats are stored unencrypted in China.  This information is made available to the government on request according to law. For example, the Chinese government monitors Uyghur activity on WeChat.

The government can also access deleted WeChat messages. It is speculated that this is part of the social credit system being implemented in China. The electronic identity system mentioned earlier may also have this use.

WeChat messages are censored in real time, as illustrated by the following dialog (source: https://citizenlab.ca/2020/05/we-chat-they-watch/). 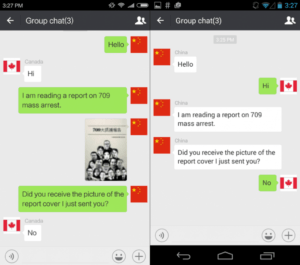 Following the overwhelming victory of pro-democracy candidates in the 2019 Hong Kong local elections WeChat censored messages related to the election and disabled the accounts of posters in other countries such as U.S. and Canada.  In 2020, WeChat started censoring messages concerning the coronavirus.

Censorship does not stop at the Chinese border. When NBA general manager Daryl Morey supported Hong Kong protests, Tencent refused to continue streaming NBA matches. The ban lasted for more than a year but is now being slowly lifted — Morey quit the NBA and moved to the Philadelphia 76ers. Games that involve the Philadelphia 76ers are still blocked.

Games are censored too. In 2019, Tencent teamed up with the Chinese Communist Party to develop patriotic games that implement game policies in line with the CCP’s policy.

The CCP also manipulates events in other countries by WeChat groups of diaspora Chinese, managed by the United Front, a network of state and party agencies. During the 2019 federal election campaign, United front groups targeted Gladys Liu, candidate for the electorate of Chisholm in Melbourne, by flooding their WeChat groups with negative comments.

WeChat has nearly saturated the market in China and is aiming to expand by targeting Chinese tourists and the Chinese diaspora abroad and by adding more services, for example in smart homes and smart cars.

All of these expansions must take place within the framework set out by the CCP. Tencent CEO Pony Ma is deputy of the National People’s Congress, China’s legislative branch of government. Much-publicized is the game “Clap for Xi Jinping: An Awesome Speech”, in which players have 19 seconds to generate as many claps as possible for the party leader. The app was released for the occasion of the 19th National Congress of the Chinese Communist Party in October 2017.

The power of platforms like WeChat and AliBaba in China is now so large that the Chinese government is preparing antitrust legislation that threatens to break up their mobile payments duopoly. WeChat will remain and further expand as the infrastructure of Chinese life. But it will do so under the guidance of the CCP and the Chinese government.