The Revenge of the Business Model

In the past year, Alphabet, Amazon, Apple and Microsoft collectively lost US$ 2trn in market value (The Economist, 31st October 2022). Uber, Netflix, Meta, Spotify, DoorDash and Snap each lost between 30% and 80% of their value. What is happening?

Briefly, rising inflation, pandemic uncertainty, supply chain problems, climate change and a war in Eastern Europe have made investors look twice at their portfolio. Are these companies still worth the risk? Can we still ride the wave of digital faith, hope, and love of future returns?

The downturn of tech stock is partly a replacement of irrational hopes by irrational fears about Big Tech.  Alphabet, Amazon, Apple, and Microsoft continue to rake in handsome revenues. But for not-so-big tech companies such as Uber, Netflix, Spotify and Twitter, the nose-dive of their market cap can be explained by a more realistic assessment by investors of their business model. Let me summarize the issues with the business models of not-so-big tech, using the classification of The Economist in Movers, Streamers and Creepers (advertisers), but using the TVE business model structure as a guideline for analysis.

Movers like Uber and DoorDash transport people, food, or other stuff. Physical costs of these business models are real. Drivers need some income, vehicles need to be paid for, and moving stuff from A to B takes time dependent on distance and traffic, despite what you promise.

Positive network effects for movers are finite. Initially, more customers attract more drivers and vice versa. But there is a point where further growth on one side of the platform does not have effect on the other side. Because moving services are local, there is a population limit on how much each side can grow. Adding more riders or drivers does not add more value for the other side.

Streamers deliver digital content on a consumer’s device, like Netflix, Spotify, Amazon video, and others. Here there are no network effects because these services are not platforms. A platform connects different markets, whereas streamers deliver content to a market. Addition of customers to any of these services does not increase the value for other customers. Addition of content does increase value, but this comes at a cost, and the value does not last.

The problem here is in the revenue model of streamers. They generate revenue mostly by flat-rate subscriptions, and by a little bit of advertising.  Revenue scales linearly with the number of subscribers. Expenses are generated by the need to pay royalties and license fees to intellectual property holders, and for some providers, to develop original content. This is hugely expensive. Expenses may grow faster than the number of subscribers. This has prevented Spotify to make a profit so far and has caused Netflix to have negative free cash flow.

To make matters worse, these costs have not been a barrier to entry for competitors with deep pockets, such as Amazon, Apple and Disney+, who have other sources of income to fund streaming.

“Creepers” is the term given by the Economist to companies who harvest personal data and monetize it by offering targeted advertising, such as Meta (Facebook), Alphabet (Google and YouTube) and Twitter (assuming it still exists when you read this).

Here the network effects are real: More users attract more users and more advertisers. But it is limited by locality too: for a local business it is irrelevant how many users there are on another continent. And most users are interested in users nearby.

The barrier to entry to this part of the economy is high, but not insurmountable. If a company invents an even more addictive matching algorithm than Facebook’s, then it can gain a fast-growing audience, as ByteDance did with TikTok.

Barriers to exit are low too. If you decide to bet the farm on the metaverse, investors may leave. And if you decide to fire the people who keep your platform running, and to bring back users who tend to flood the zone with shit, then advertisers may leave.

Governance costs in the social media space are high. When Apple decided to add a tracking transparency feature to their platform, Meta discovered that the cost of using other companies’ delivery technology, iOS in this case, is high. And social media are under the scrutiny of governments for alleged anticompetitive behaviour, distribution of hate speech and misinformation, and violations of privacy laws.

The Revenge of the Business Model

These developments show that there is a world beyond the virtual world of bits delivered at a consumer’s device, and that this world is relevant for revenue. The business model bites back.

To understand the promise and risks of these companies, we need to zoom out and consider their business model. Digital business models consist of four parts, of which networks and technology play just as prominent a role as the value proposition and revenue model [Wieringa & Gordijn 2023]. Here are the four parts, represented as four corners of a diamond. 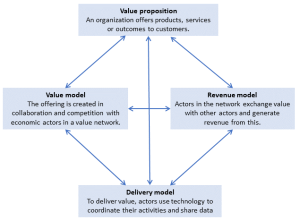 The companies discussed above have flaws in one or more parts of their business model.

None of this proves that not-so-big tech will fail. But it does show that being digital is not a recipe for success. To assess the long-term sustainability of a company, you need to consider its entire business model diamond.

Governments bite back too

Companies do not exist in a vacuum, not even if their business is digital. They need physical offices, machines, networks, and people just like anybody else, and these physical and social resources are located in countries that have governments, laws, and a culture. Some business models depend on breaking local rules and regulations under the banner of Innovation and Progress. But in the end, governments tend to intervene, either with democratic legitimation or with authoritarian legitimation.

These things were problematic all along. In the current economic climate, shareholders are starting to realize this.

David S. Abraham. The Elements of Power. Gadgets, Guns, and the Struggle for a Sustainable Future in the Rare Metals Age. Yale University Press, 2015.

Guillaume Pitron. The Rare Metals War. The Dark Side of Clean Energy and Digital Technologies. Sribe, 2020.

“What went wrong with Snap, Netflix and Uber?” The Economist, 31st October 2002.